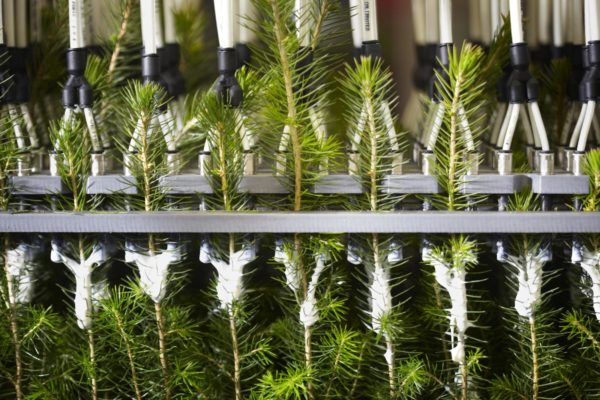 The common pine weevil, Hylobius abietis, is causing the Swedish forestry sector ma – jor damage. Experts estimate damages cost up to nearly one billion Swedish Kronor annually! Over the past 150 years, scientists have developed various protection methods to reduce pine weevil attacks in our forests. Stump extraction, metal collars, prescribed rest and numerous insecticides are just some methods that have been tested. Since the 1940s and onwards, insecticides have almost exclusively been the most common protec – tion method against the pine weevil.

This type of protection has shown to have a relatively high protective effect, but a negative impact on the environment. The Swedish Chemical Inspectorate, Keml, and Forest Stewardship Council, FSC, have long been working on regulating the use of insecticides and actively worked for a forest industry free from insecticides. The decisions and guidelines that are now established from these organisations are clear and confirmed. The use of insecticides for protection against the pine weevil is no longer accepted. However, FSC has granted a short-term ex – emption for the use of some insecticides to several plant producers. This is approved only if an action plan towards an environmentally friendly method of treatment is shown. It is obvious that the Swedish forest industry and other markets with similar problems need a long-term sustainable protection against the pine weevil, a method which is both effective and environmentally friendly.